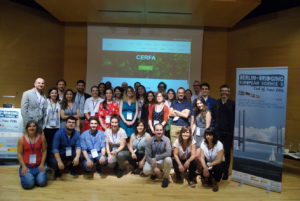 The Societies of Spanish Researches in Germany (CERFA), Sweden (ACES) and Denmark (CED) have joined efforts to organize the Symposium “Bridging European Science II”, offering a pan-european perspective of science, gathering scientists from Germany, Sweden, Denmark and Spain. You can check the final program here.

The Syposium took place at the Embassy of Spain in Berlin (Lichtensteinallee 1, D-10787 Berlin) and offered the possibility to join a Conference Dinner & Wine tasting at the Berlin Festsaal Kreuzberg, in am Flutgraben 2, Berlin (the dinner and the transportation to the venue at the end of the Simposium were provided by the organization free of charge).

Members of CERFA had the possibility to overnight in Berlin and join  the Annual Meeting next day Sunday, 3rd June (also at the Embassy of Spain).

The Societies of Spanish researchers in Germany (CERFA), Sweden (ACES) and Denmark (CED) are independent, non-profit organizations that join Spanish scientists in their respective countries. These societies represent a first point of contact for many Spanish researchers and students abroad, of all scientific disciplines, and share common goals:

This event was possible thanks to the support of our main sponsors: